Are your employees complaining about wages?

The economic fallout many businesses are experiencing because of the pandemic may lead employees to vent to one another about their wages.

While that may not bode well for morale, those conversations most likely would be protected activity under the National Labor Relations Act (NLRA).

In October, the National Labor Relations Board (NLRB) released several Division of Advice memos. These memos are essentially responses to legal questions that have come up.

Once a dispute has ended, some of the memos are released to the public as required under law, while others are released at the general counsel’s discretion. It’s a way for employers to have a glimpse at what to do (or not to do) regarding NLRA compliance. 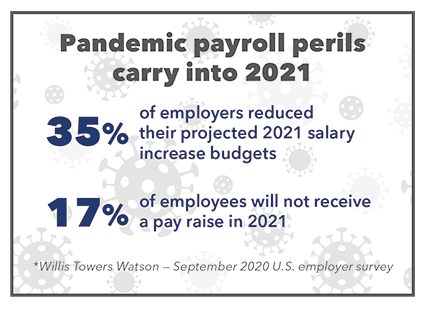 One recent memo had to do with a tip pooling controversy at a New York restaurant. Four restaurant employees were having discussions and complaining about the tip pooling procedures and, as a result, they were fired.

Apparently, the employer’s tip pooling system had been a source of employee frustration since the restaurant opened.

During various pre-shift and staff meetings, some employees, including the four that were fired, objected to the non-transparency and unfairness of the employer’s tip compensation system, whereby management would count and divide tips among employees regardless of their shift.

The workers proposed that employees be apprised of the tip totals for each shift and that the tip pool be divided between the lunch and dinner shifts because dinner work was more stressful and busier than the lunch shift.

The employer repeatedly told employees, including the four, to not complain or talk to each other about the tip issue, and that doing so could endanger their jobs — which it eventually did.

In the end, the NLRB decided that the four employees’ tip pooling discussions were protected activity and their conversations were a motivating factor in their discharge.

Key to remember: Employers may not discharge, discipline, or threaten employees for certain protected concerted activity, such as discussing wages. Employers are also not allowed to coercively question them about this activity.

Michelle Higgins is an Associate Editor on the Human Resources Publishing Team at J. J. Keller and she creates content on a variety of employment-related topics including benefits, compensation, overtime, wage deductions, exempt/nonexempt employees, health and retirement plans, independent contractors, and child labor.

Listen up to lower stress levels

Are you a motor carrier looking to hire drivers? Read on

Independent contractor or employee? What does the IRS say?

This newsletter helps you stay ahead of emerging regulations and trends on pay and other issues that can impact your organization’s employment benefits and compensation program.