The ink wasn’t dry before legal challenges against OSHA’s Emergency Temporary Standard (ETS) began. The ETS requires private employers with 100 or more employees to ensure employees are either 1) fully vaccinated, or 2) undergo weekly testing and wear a face covering indoors.

A day after the ETS was published in the Federal Register, a petition to stay it came out of the Fifth Circuit Court of appeals, claiming that OSHA overstepped its Constitutional authority in issuing the rule.

The court is expected to rule quickly, given the nature of the issue. No matter which way the Fifth Circuit court rules, the decision is likely to be appealed. To complicate matters, several suits have been filed in other jurisdictions. OSHA lobbied for consolidation of challenges to ETS, using a lottery system to determine which court/circuit hears the case. Therefore, these cases may ultimately be consolidated with the Fifth Circuit case and heard before a special counsel of judges or the Supreme Court. So, for now, it’s a waiting game that will likely see rulings and appeals for the next couple of weeks.

For employers, though, the scheduled enforcement of the rule does not change, so long as all is settled prior to the first compliance date of December 6. Businesses should not assume the rule will be tossed out. There’s a chance that after the dust settles it will still stand, given that vaccine mandates have survived challenges. Businesses, therefore, should at least plan their implementation strategy, in case the rule does survive the legal challenges. Rushing to put together policies and plans often leads to problems.

Are you properly cleaning up broken lamps 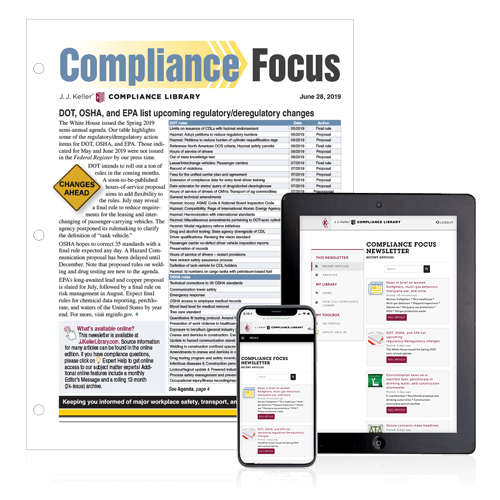 This comprehensive, twice-monthly newsletter helps you stay on top of critical regulatory and compliance developments from OSHA, DOT, EPA, and other federal agencies.