Wage overpayment errors can and will occur

Regardless of the reason, employees are not necessarily entitled to keep the extra money, and employers need to know their obligations for recouping it.

Under the federal Fair Labor Standards Act (FLSA), employers don’t need an employee’s permission to recoup wage overpayments. The extra money is seen as a loan or a wage advancement to the employee.

Because of this, employers are generally free to recoup the overpayment from the next paycheck — even if such a deduction cuts into the minimum wage or overtime pay due the employee under the FLSA.

State laws, however, may have greater restrictions. For example, New York employers may only make deductions from an employee’s wages for “an overpayment of wages where such overpayment is due to a mathematical or other clerical error by the employer.”

There are also limitations on the timing and duration, frequency, and method and amount of recovery.

The bottom line is, employers should try to avoid getting themselves into an overpayment situation in the first place. Supervisors should closely review their direct reports’ timesheets to catch errors before paychecks are issued.

Also, employees should be encouraged to review their pay stubs for accuracy to help catch mistakes sooner rather than later.

If a mistake happens, employers should do their due diligence to communicate with the affected employees and make a reasonable plan to recoup the funds (provided it’s allowed under state law) so as not to cause any unnecessary financial harm to employees.

Key to remember: Wage overpayment errors can and will occur. Employers need to know their obligations under both federal and state laws before recouping money.

Michelle Higgins is an Associate Editor on the Human Resources Publishing Team and she creates content on a variety of employment-related topics including benefits, compensation, overtime, wage deductions, exempt/nonexempt employees, health and retirement plans, independent contractors, and child labor.

How to collect premiums during unpaid FMLA leave

How to donate PTO and help COVID-19 victims 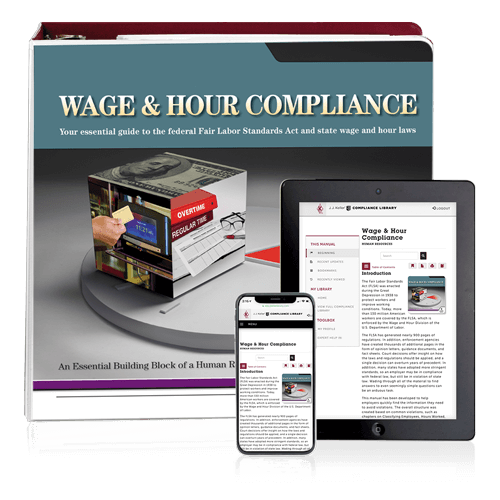 Provides critical information to help you comply with the Fair Labor Standards Act (FLSA) and state wage and hour laws. Serves as a go-to resource for anyone involved in employee classification, payroll and recording/tracking hours worked, as well as anyone with compliance obligations.