Use MVRs to mitigate risk

MVR monitoring is more than complying with the safety regulations

As a part of the driver qualification process, a motor carrier is required to request an MVR when hiring an operator of a commercial motor vehicle (CMV), and annually thereafter.

The Federal Motor Carrier Safety Regulations (FMCSRs) do not dictate standards when reviewing the record. But at minimum, the carrier must ensure the driver is properly licensed for the vehicle assigned. Any other standards would be a matter of company policy and may include input from the motor carrier’s insurance provider.

Even if a carrier faithfully requests an annual MVR, it may be left in the dark about a driver’s current driving record between reports. Sure, commercial drivers are supposed to notify employers of loss of driving privileges and certain violations between MVRs. But what if the driver fails to communicate an event, is the employer still held responsible? Unfortunately, yes. And it may have far-reaching implications.

Negative impacts of not knowing

A driver who hides a serious traffic conviction or loss of license is putting his or her motor carrier at risk.

For instance, a driver with a suspended license will be placed out of service at a weigh station, leaving the carrier to pick up the pieces, including finding another available driver who is nearby to continue the trip to the customer. Any delay in the delivery may result in an angry customer, which could hurt the carrier’s business relationship. And the roadside inspection is held against the company’s Compliance, Safety, Accountability Driver Fitness BASIC score, which may affect its reputation and insurance rates.

In addition, if it is learned during an audit that a disqualified driver was operating a CMV, even without the carrier’s knowledge, it is still in violation.

If a driver is involved in a high-profile crash, his or her poor driving history (even if licensed at the time) may result in claims of negligent entrustment, meaning the carrier should have known its driver was a danger on the road.

The annual MVR is the minimum driving history that a motor carrier is obligated to request. The carrier is permitted to request full MVRs more often or use an alert system which notifies users whenever something changes on a driving record (e.g., new med card, ticket, etc.). Using a third-party service to monitor driving records to alert carriers to changes is also an option.

Motor carriers should create a policy to identify which traffic citations and crashes are unacceptable based on company standards. The policy should address both driver candidates and existing drivers. If a driver does not meet the standards, specific actions should be outlined in the policy.

Often, carriers work with their insurance providers to create the policy when determining the standards. If a person is not insurable, it leaves no wiggle room. Often MVRs are scored, placing a severity value on traffic citations and crashes. If a driver exceeds a predetermined limit, the policy dictates a specific action on the part of the carrier (e.g., no longer in consideration for position, coaching, discipline).

Getting a driver back on track

For an existing employee, the consequences of the policy don’t always have to be termination. Refresher training, coaching, or some other safety management control may help get the driver back on track.

When a motor carrier learns of an unsafe driving practice, it’s a common practice to coach the driver so it doesn’t become a pattern. The carrier needs to address problem behaviors before something more serious happens — like a crash.

Key to remember: MVR monitoring is more than complying with the safety regulations. MVRs are a risk management tool that will alert a motor carrier to high-risk drivers. 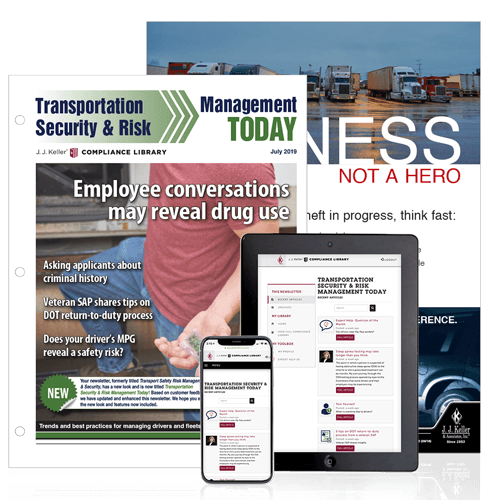 This essential newsletter helps you stay up-to-date on the latest security and risk management news. It delivers best practices to help protect your employees, freight, facility, vehicles, data and reputation as well as your customers and the general public.