When the revisions to the walking-working surface regulations took effect in January 2017, they included quite a number of changes. The following are some questions that we continue to receive about some of the changes.

When can I use a designated area for fall protection?

What is the maximum distance between support posts for guardrails?

The regulations don’t specify a maximum distance between the supporting posts. However, the guardrail must be strong enough to support 200 pounds of force applied horizontally, which may affect the spacing. In addition, if the guardrail has intermediate vertical members (uprights between the top and bottom rails), the gaps should be no more than 19 inches (see 1910.29).

Are wheel chocks required for trailers at loading docks?

Employers must use some method to prevent the trailer from moving. OSHA gives examples of wheel chocks or sand shoes, but other methods could be effective, such as dock locks. Note that even if the dock ramp is inclined so the trailer sits at an angle, a trailer could still move, so an additional methods (like chocks or locks) would still be required to prevent movement.

Do cages have to be removed from fixed ladders?

No, cages do not have to be removed from fixed ladders, whether over or under 24 feet. The regulation explicitly addresses this at 1910.28(b)(9)(iv), stating, “The employer may use a cage or well in combination with a personal fall arrest system or ladder safety system provided that the cage or well does not interfere with the operation of the system.” OSHA noted that cages or wells may allow workers to rest while climbing and working on fixed ladders.

Can we use chains as fall protection at a loading dock?

Maybe. OSHA does not specifically allow or prohibit chains. If used, chains must be equivalent to a guardrail, so at least two chains would be needed because a guardrail must have a top rail and mid rail. A single chain would be a violation. In addition, the chains must be able to withstand 200 pounds of force, and should be tight enough so that a person could not fall between the chains and the dock edge.

How often do portable ladders have to be inspected?

Any portable ladder (whether wood or metal) must be inspected before the first use on each shift. If a ladder will not be used that day, you don’t need to inspect it. However, the first time a ladder is taken out for use each shift, it must be checked for defects. If any problems are found, the ladder must be removed from service for repair or replacement.

Teach workplace managers how to inspect for safety

OSHA to get more bite under Infrastructure bill 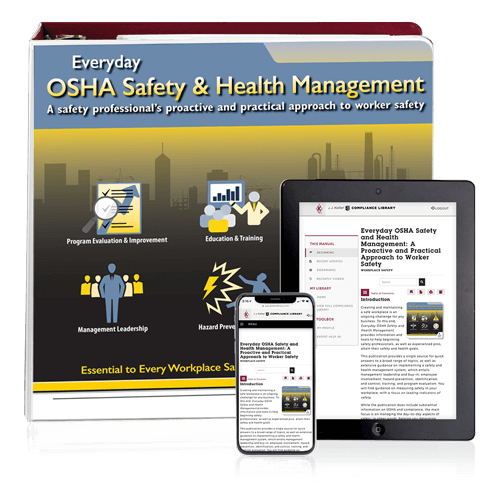