Twice each year, government agencies publish the regulatory agenda — a robust to-do list signifying their goals for the coming months. 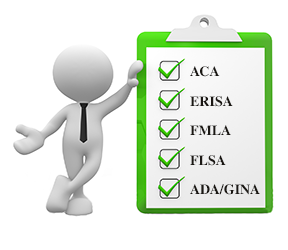 Here are a few items to keep on your radar by agency:

ACA: The Department of Labor (DOL) will invite public comments to better understand the challenges that group health plans and group health insurance issuers face in avoiding a loss of grandfathered status under the Affordable Care Act (ACA). The DOL also hopes to determine whether there are opportunities for the government to assist such plans and issuers, consistent with the law, in preserving their grandfathered status in ways that would benefit employers, employer and employee organizations, plan participants and beneficiaries, and other stakeholders. Proposed rule scheduled for September 2019.

ERISA: The DOL is looking for input in response to Executive Order 13847, Strengthening Retirement Security in America, and to explore ways to reduce the costs and burdens imposed on employers and other plan fiduciaries responsible for the production and distribution of retirement plan disclosures required under title I of the Employee Retirement Income Security Act (ERISA). The DOL is also seeking out ways to make these disclosures more understandable and useful for participants and beneficiaries. Proposed rule scheduled for December 2019.

FMLA: The DOL is planning a Request for Information (RFI) to solicit comments on ways to improve its regulations under the Family and Medical Leave Act (FMLA) to better protect and suit the needs of workers; and reduce administrative and compliance burdens on employers. RFI scheduled for April 2020.

FLSA: The DOL expects to align its regulations with the fiscal year 2018 Consolidated Appropriations Act with respect to an employer’s use of employee tips. The DOL also plans to revise the existing “dual jobs” regulation to provide greater clarity regarding an employer’s ability to take a tip credit to satisfy minimum wage obligations for time spent by a tipped employee performing duties that are related to the employee’s tipped occupation. Proposed rule scheduled for December 2019.

ADA/GINA: The Equal Employment Opportunity Commission (EEOC) proposes to amend the regulations to implement the equal employment provisions of the Americans with Disabilities Act (ADA) and the Genetic Information Nondiscrimination Act (GINA) to address the interaction between those laws and wellness programs. Final rules were published in 2016, but in 2017, the U.S. District Court for the District of Columbia ordered the EEOC to reconsider them (AARP v. EEOC). The rules were rescinded in 2018, and the EEOC is now developing proposed rules to again address wellness programs under the ADA and GINA in response to the court’s ruling. Proposed rules scheduled for December 2019.

Michelle Higgins is an Associate Editor on the Human Resources Publishing Team and she creates content on a variety of employment-related topics including benefits, compensation, overtime, wage deductions, exempt/nonexempt employees, health and retirement plans, independent contractors, and child labor.

What Employers Need To Know About Workers' Comp

Are your employees complaining about wages?

This newsletter helps you stay ahead of emerging regulations and trends on pay and other issues that can impact your organization’s employment benefits and compensation program.